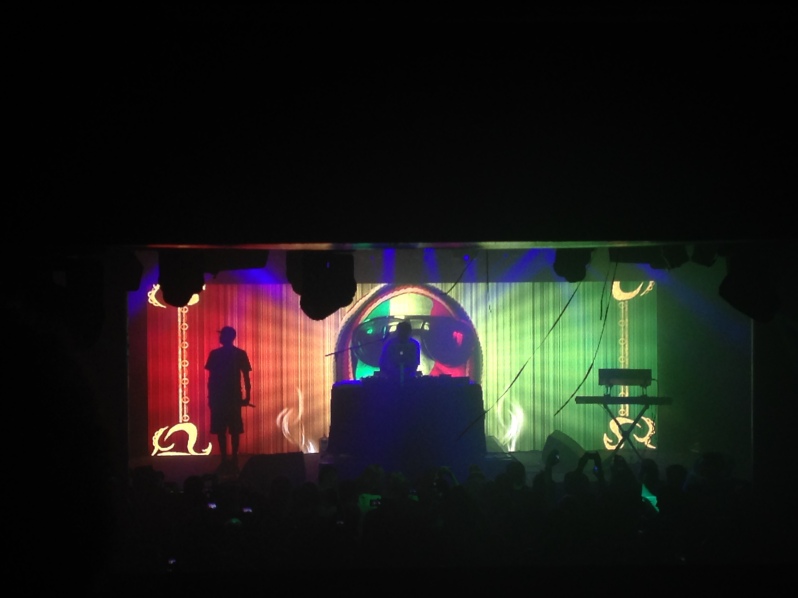 On Saturday night I found myself at the Arena in Fortitude Valley, to do a little undercover project for Collective Shout. My mission was simple, to watch Snoop Dogg’s show and observe whether he really is the ‘newly reincarnated reggae artist’ that people think he is, or if he is still a misogynistic, pimp-obsessed gangster rapper.Before I even talk about Snoop’s show however, I want to talk about what it was like to watch Major Lazer, the support act for Snoop.

On a positive note, the show was definitely high-energy and perfect to go nuts to – as I found out when I copped a wayward arm to the face. Needless to say, I soon found myself adopting a protective dance style in which I busted a 90’s side-step routine while holding my arms in front of my face – I call it the protective white girl move. Totally works to keep creepy dudes from hitting on you, and keeping your face pretty. Winning!

Despite the raging fun of the crowd however, I was shocked when I actually saw what was going on in front of me. Major Lazer’s set made me feel more like I was watching a strip show, than a ‘music’ act.

With songs like ‘Bubble Butt’, I guess it’s not that surprising that the female dancers would be twerking all over the stage with their underwear wedged half way up their asses – but it was the porn-like performance between the women and a male audience member that I found truly shocking.

The act was so intense that I couldn’t tell if the woman was actually in control, or if the man was the one doing all of the ‘throwing.’

Wow, thanks for the insightful explanation Major Lazer.

We truly are living in a pornified culture, in which the talent of music, advertising and film, seems to come second to sex. It’s deeply disappointing – like I said, this was such a high energy show and it really could have stood on its own feet without the need for porny displays of ‘simulated fucking.’

When Collective Shout campaigner Talitha Stone began campaigning to have Snoop Dogg banned from performing in Australia, we were of course met with a lot of hostility from fans. Many of them were quick to defend their idol, by saying that he was no longer a rapper, but instead a reggae performer who now believed in peace and love, and should not be judged on his past – which includes drug charges, confessions of trafficking women for sex, and giving drugs to minors (whom he encouraged to expose their breasts on film).

Although sceptical, I had hoped that they were right. At his show last night, I was thinking how nice it would be to walk away and give a positive review of the ‘reincarnated’ Snoop. Unfortunately, there was very little ‘peace and love’ in his set, and instead over 60 minutes of music, imagery and words that focused heavily on pimping, ‘hoes’, fucking and drugs.

In an interview with Rolling Stone just last year, Snoop admitted to living out his fantasies as a PIMP when he was younger. He bragged about selling women’s bodies, ‘city to city, titty to titty’, and revealed how he got a rise out of being able to ‘fire a bitch, fuck a bitch, get a new ho.’ Since then, it has been revealed that he was involved in luring young women backstage at his concerts in order to pass them onto other pimps. Jacqueline Homan reveals on her blog, how one of the girls was held captive while pregnant, and told that her family would be killed if she left. This was apparently during Snoops ‘Playboy’ tour.

On Saturday night however, proving that he holds no remorse for his history of trafficking women, Snoop performed the track ‘P-I-M-P’ only 3 songs into his set. Swaggering around the stage with his posse of gold-chain wearing gangsters, they rapped:

Snoop then bragged about keeping women in line, rapping:

“Yeah bitch … I’m bout to show you how my pimp hand is way strong
You’re dead wrong if ya think that pimpin’ gon’ die
Twelve piece with a hundred hoes by my side.”

Snoop also performed tracks such as ‘I wanna Fuck you,’ which he dedicated ‘to all of the sexy ladies.’ Oh, how cute! (insert projectile vomit emoticon). Behind him, the projector screen played images of half-naked women grinding on poles and writhing on the floor as he rapped about what he wanted to do to their bodies. There was also the song, ‘Ain’t No Fun (If the Homies Can’t Have Some) in which he and his posse brag about fucking women they have no respect for, and then passing them between each other.

“…pay this hoe, just to lay this hoe
I know the pussy’s mines, I’ma fuck a couple more times
And then I’m through with it, there’s nothing else to do with it
Pass it to the homie, now you hit it
Cause she ain’t nuthin but a bitch to me
And y’all know, that bitches ain’t shit to me

…it ain’t no fun, if my homies can’t get a taste of it
Cause you know I don’t love em.”

While Snoop was carrying on with this lovely piece of misogyny, a man dressed in a ‘Nasty Dogg’ animal costume walked around the stage swinging a green dick at the crowd. Snoop ‘reprimanded’ him by saying, “Put that away man!” before inviting his female fans to come backstage after the show to “touch that fluorescent green dick.” 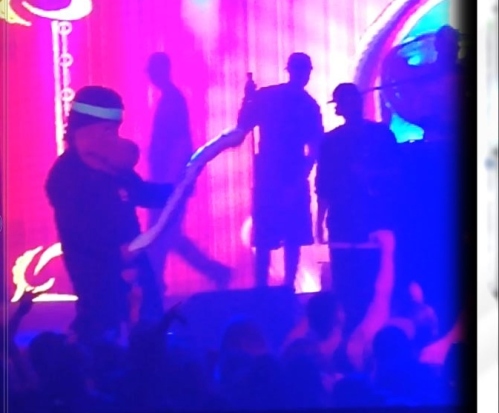 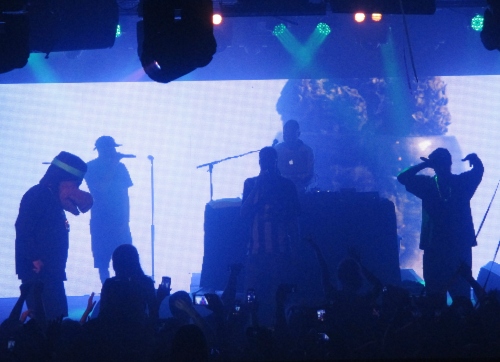 In Snoop’s music, women exist mostly as hoes, bitches, and a solution to his lazy song-writing. “Dayummm, I’ve only got 2 minutes worth of music man. I know, I’ll add some ‘bitch’ and ‘hoe’ references. Fo shizzle!’”

It also needs to be noted that for someone who is apparently anti violence, Snoop had no problem performing old material that glorified the use of guns, such as ‘Drop It Like It’s Hot’.

“If you play me close, you’re on a red beam
Oh you got a gun so you wanna pop back?
AK-47 now nigga, stop that!
…Pistol whip you, dip you then flip you”

Drug use and it’s glorification was also rampant during the set. Despite having been banned from Australia in the past for his history of drug-use, Snoop proudly disregarded the law by smoking marijuana during the night, and encouraged the audience members to ‘get high’ also.

“Who has some sticky icky? I’ve got some sticky icky in my pocket,” he bragged, before taking out a joint and having his DJ light it up for him. Puffing away, he saunters around the stage like some-sort of alpha male, before rapping, “Who wants to get fucked up? Everybody say ‘I wanna get fucked up!’”

The problem with this isn’t even a matter of ‘moral’ high-ground. Whether you’re pro or anti cannabis, doesn’t really matter. The reality is that the use of cannabis in Australia is illegal in most states, and if I were to be caught with marijuana in my car on the way to the concert, I would most definitely have been charged with drug possession. Yet Snoop clearly didn’t give a fuck about the law, blatantly disrespecting the requirements of his Visa and encouraging others to break the law too. ‘Get high, get high, get high, get high’, he rapped in one song, while in another he sang, ‘So what we get high? … we’ll be young, and wild, and free.’

Another disturbing aspect was what happened when the show came to a close. Preparing to leave the stage, Snoop called out to his crew:

At this moment hoards of women appeared from an unseen spot side of stage (I had the feeling it was pre-arranged), and several began climbing out from the crowd to join the other young women.   One stumbled onto the stage with no pants on, dressed in only a high-cut bodysuit (like one of those Pamela Anderson-style bikinis) and a pair of high heels which she tripped and fell out of. Scrambling sloppily to try and collect her shoes, she kneeled on the floor for a while, before standing and staring blankly into the crowd. Her expression and clumsiness made me wonder if she was drunk, or high on drugs… Eventually she too stumbled out the back to join the others.

You can say all that you want about Snoop Lion and his ‘new perspective on life’, but the show I saw last night was nothing but glorified gangster behaviour. It was pathetic, sad, and ugly. I recorded at least 10 tracks from the show – and every one of them talked either about pimping, hoes, fucking or getting high.

‘Snoop Dogg’ is not just a stage character. We know that he used to work as a real-life pimp, something which he still brags about – both in interviews and in his music. He continues to perform music that depicts women as sexual service-stations, and untrustworthy, loose ‘bitches’. He may be anti-gun violence, but he is yet to show remorse for his degrading attitudes towards women. Why does none of this matter to our government? Why does none of this matter to his fans?

As my friend Melinda mentioned:

“ The show was very short on peace, love and snoop lion, and big on pimps and hoes and weed. He needs to have another go at the reincarnation thing, the first one didn’t take!”

Note: Snoop still has several other performances lined up while he is in Australia (including all-ages shows!). If you believe the degradation of women is an important issue, please sign the following petition urgently!