Lovers of fabric and all things fashion are always on the lookout for new and unique labels; the weird, the wacky and the extreme. We also love fashion with a great story. In the last few years one particular Australian label ‘Black Milk’, has risen up from the cutting room floor to become one of the most loved online fashion stores.

Boasting more than 200,000 fans on Facebook, Black Milk has come a long way from its humble beginnings, becoming a household name among many young women.

“Several years ago I was broke, bored and rather cold. At that point most people would have got a job and a beanie, but not I. For some reason I decided to buy a sewing machine and make myself a shirt. I still have no idea why. So I went into a big fabric shop and looked at all the different fabrics they had – but after buying a second hand sewing machine, I only had six bucks in my pocket, which meant I had to get the cheapest fabric they had – nylon lining. Because nylon lining doesn’t look particularly attractive, it meant I had to make it fitted. I made myself a tight shirt. It was tragic. The stitching was wrong, the pieces were cut weird, and the neck was a nothing more than a hole. And I loved it. I wore it constantly.”

Take a look online and you will see why everyone is talking about Black Milk. But it’s not just the floating jellyfish print leggings, cute cupcake animal dresses, unimpressed bunnies and galaxy emblazoned catsuit’s that make this brand what it is. Black Milk have also managed to do what few brands can, creating a true community where girls can share their love of fashion without being subjected to the negativity and male-sexist comments that so often surround women’s images online.

Black Milk Founder and designer James Lillis (JL) is passionate about more than just creating incredible, unique and funky designs for women, he is also passionate about creating a safe and fun environment where women can interact, sharing their love of fashion without their bodies being criticised or sexualised.

In his blog, JL states that the 5th commandment of Black Milk is simple:

“You shall not make critical comments on other women’s bodies”.

This should be a given, however it rarely happens online, especially in the world of Facebook.  Think of how often we look at other women’s bodies and make snitchy comments – ‘Ergh she’s so boney!’, ‘Eww she looks like a skank’, ‘She should eat more’. In the online world, our bodies are also rarely safe from the scrutinising of men, who are increasingly using social networking sites to ‘bond’ through vulgar, perverted viewing of women.

What JL has created, is an online space where girls can be girls, sharing images of themselves and their fashion with other fellow ‘sharkies’ (the affectionate term that Black Milk fans have adopted) without fear of negative self-image comments or male ‘creeping’.

JL writes, “Peeps put their pics up to share their look with like-minded girls. They don’t do it to be criticised. And, of course, if girls do constantly get their bodies criticised when they show photos, what’s going to happen? Girls will stop posting photos and the Black Milk Facebook page will become as boring as… well, every other fashion label’s Facebook page.

“I have a very simple policy – if you comment on a woman’s body and I think that your comment would hurt her feelings if she read it… you’re gone. No warnings, just kapow.

“If I feel like a guy is commenting more on the girl’s body that the clothes… gone.” 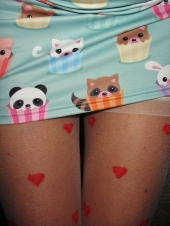